The Future of 3.5 GHz Services is Now

It’s not often that you can actually feel the ground shift under your feet. It happened to me at Mobile World Congress last week, and, though we were in LA, this was not an earthquake. It was the tangible, visible shift in the conversation from what’s next (5G) to what’s here and now: CBRS/OnGo. 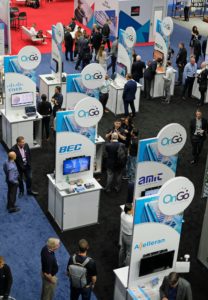 One of the highlights of the week was the OnGo Workshop, where FCC Chairman Ajit Pai keynoted. He made two key points that really resonated with me. First, he underscored the value that CBRS brings to the economy, unleashing between $8 billion and $26 billion annually in consumer benefits. Secondly, he reiterated something that has become crystal clear just over the past few months: CBRS is a key part of 5G development in the US, and is now a cornerstone of the Commission’s “5G FAST” plan. CBRS is here today and will set the stage for 5G with common architecture, services and ecosystem. My favorite quote from the Chairman’s keynote: “The new iPhone 11 may not support 5G, but it does have a 3.5 GHz chip. The future of 3.5 GHz services is now.” 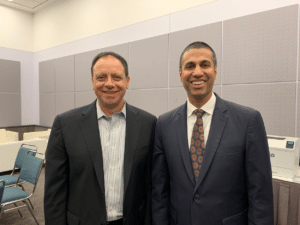 booths. In fact, we started the week at a very public demonstration of one of the newest commercial sites at Angel Stadium in Anaheim. In an effort led by Connectivity Wireless and supported by JMA Wireless and Federated Wireless, we watched a live demonstration of push-to-talk technology across the stadium, using just one access point. Of course, the final architecture will have a few more radios installed for full coverage and capacity, but the potential for using shared spectrum is abundantly clear. 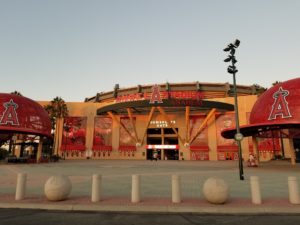 JMA Wireless took CBRS demos to a whole new level, featuring a live CBRS network in their booth.  The network showcased some of the many applications that are already being driven by CBRS, including the digital signage in place at American Dream Entertainment Complex, smart city/smart venue kiosks with video utilizing mobile edge compute, a vehicle mounted router that roams from licensed to shared spectrum for dash cam and body cam video upload, high quality voice headsets for sports and entertainment venues, push-to-talk handsets . . . everywhere you turned in the booth there were new ideas on display. And many of the ecosystem partners were represented as well. 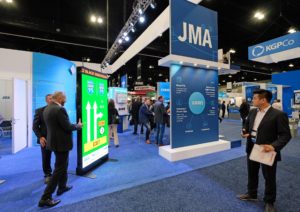 Along with Federated Wireless, all four major smart phone manufacturers were in use, Motorola had PTT handsets, Vapor IO was running their Vapor Chamber, and there were partner devices from Cradlepoint, MultiTech and Encore Networks.

Speaking of Cradlepoint, that roaming vehicle enabled with CBRS could be found in their booth as well, along with several other Industrial IoT applications they are supporting with CBRS. 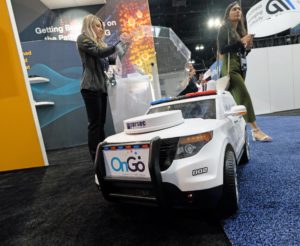 The Ericsson booth featured a demo of another early deployment favorite – Landmark Dividend showcasing the CBRS-enabled digital kiosks they are lighting up throughout the Dallas Area Rapid Transit (DART) system. Featuring video cameras and digital signage, the kiosk are enabled with Wi-Fi plus CBRS for public use, private use by DART, and offload so all networks can run to full capacity.

Samsung treated us to a sneak peek into their future plans, which I can’t talk about here, but their public booth also highlighted some of the CBRS network devices that they are already deploying, along with the Samsung Galaxy S10 that was among the first CBRS handsets on the market. 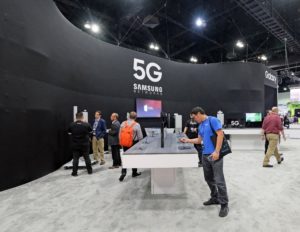 After  I finished meetings with several customers and 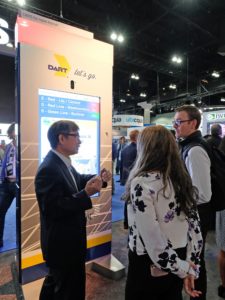 partners and had a chance to walk the exhibit floor, I started to really notice a trend in the early applications we’re seeing – video/video surveillance, digital signage, push-to-talk, Wi-Fi backhaul, carrier offload, and fixed wireless for both neighborhoods and business.

CBRS is big and here and coming faster than anyone expected. It was an exciting event. Looking forward to the next phase – deployment and scaling!

Welcome to the Future of Federated Wireless

Federated Wireless has gone through an incredible evolution to get to where we are today. To…

The word is out. CBRS is adding measurable performance and speed to mobile networks. Earlier this…